As the year comes to an end, we look back at the life of our sangha for the past 12 months. Together we sat retreats, inaugurated a new monastery, made origami paper cranes, sewed rice field patterns, walked in the forest, prepared oryoki meals and made vows to live for the liberation of all beings. As we enter into a new year (and a new decade!), we look forward to continuing to practice together – in Brooklyn, at Ancestral Heart Zen Monastery and in the world.

On May 19, a group of teens and co-facilitators got together for a day of community and practice including meditation, movement, and mindful cooking. Awake Youth Project is a secular BZC program that introduces teens to a path of mindfulness and meditation to deepen emotional awareness, understand conditioned behavior, and live in accordance with their most authentic aspirations.

The Sit- a-Thon, a spring fundraiser that culminated with a day of community sitting, raised over $44K for Brooklyn Zen Center’s programs and offerings. Throughout the day, we sat in silence and community, bringing to the cushion our intention to keep stillness in mind and body as a form of generosity towards our sangha. In this image the Sit-a-Thon Committee: Emily, Thomas, Alexandra, and Flo (minus Camille, not pictured). 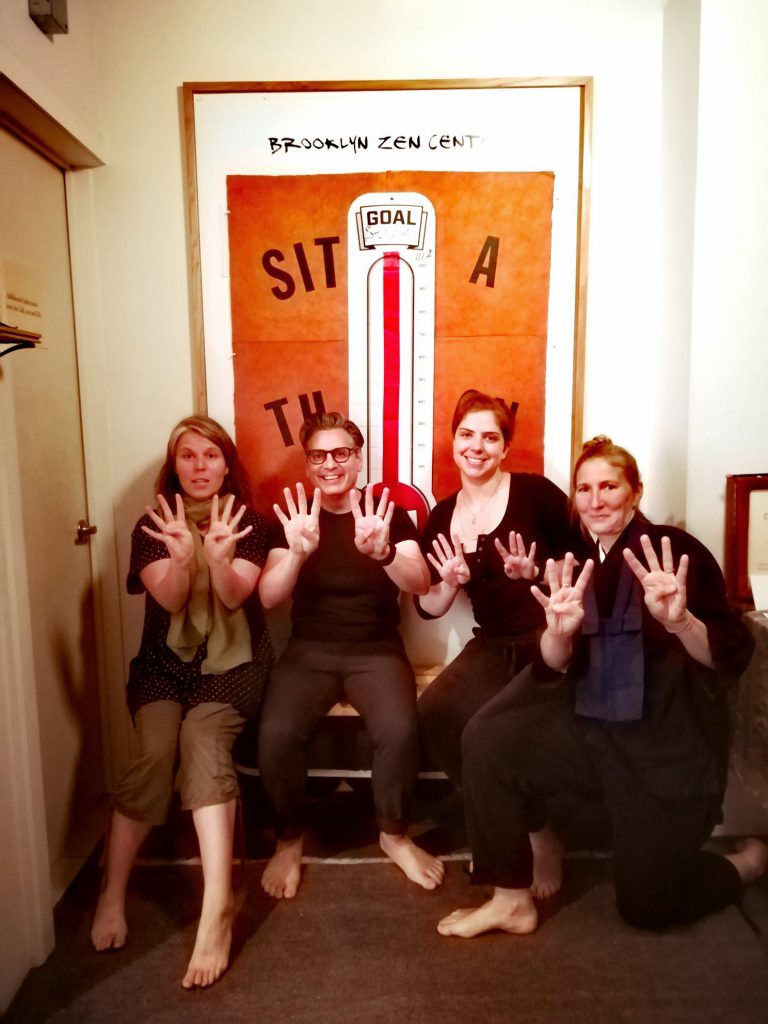 Tenshin Reb Anderson has been returning to Brooklyn Zen Center each year to lead a spring Sesshin with our sangha. This year’s sesshin focused on the theme of Zen Practice and Buddha Activity. Tenshin Roshi asked us to meet the cries of the world again and again with a simple question: “Can you see every situation with all beings as another opportunity to cultivate compassion?” 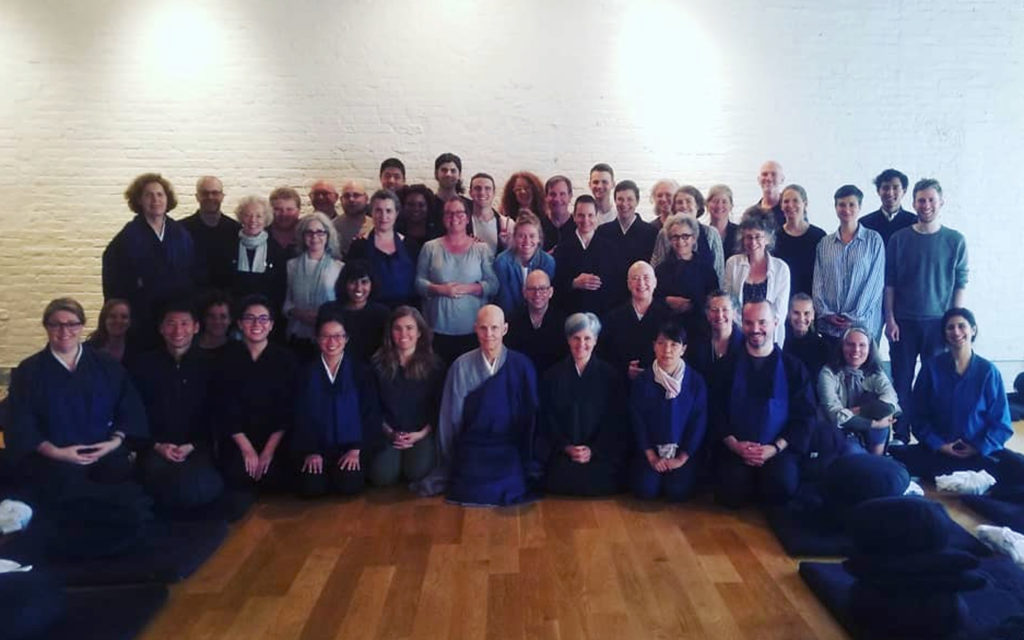 The han is the wooden block that hangs near the entryway of the meditation hall. It is a traditional Chinese way to call people to meditation. The three “rounds”, each ending in a “roll-down,” summon first the outer community, then the people living in the monastery, and finally announce that the teacher is coming to the meditation hall. This beautiful han, made from a walnut wooden slab, was a precious gift from Eric Manigian to the new monastery. 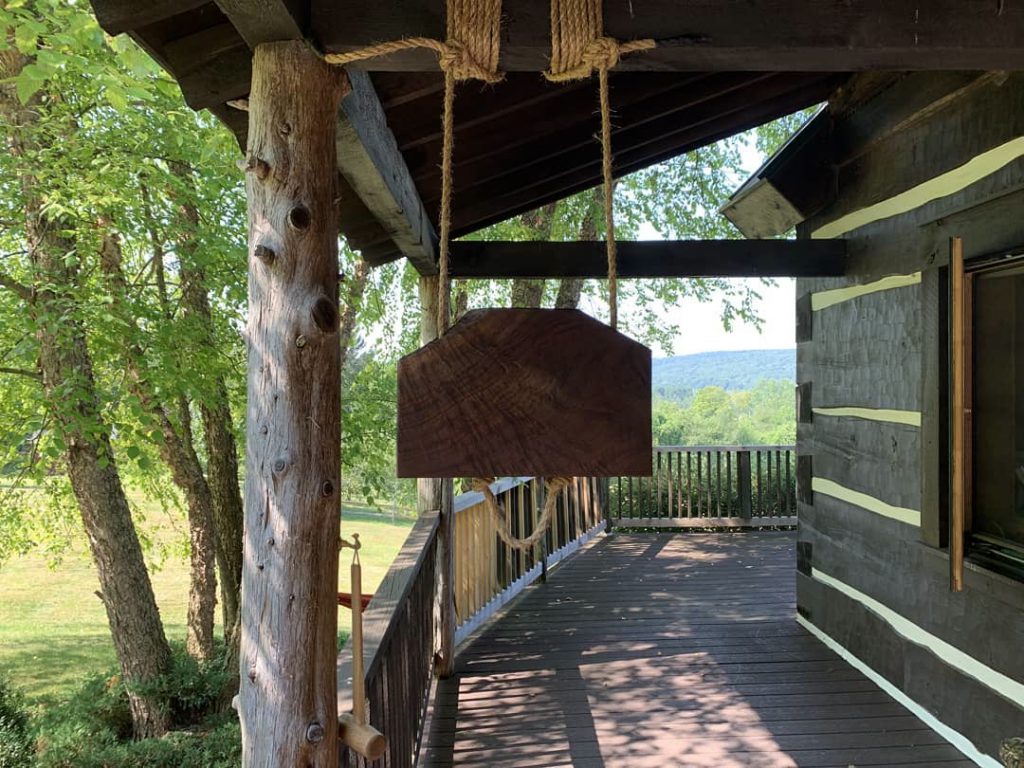 Origami against migrant detention in the U.S.

In July, the Brooklyn Zen Center sangha joined communities across the country in folding origami paper cranes to support a Buddhist memorial service to protest migrant detention in the U.S. 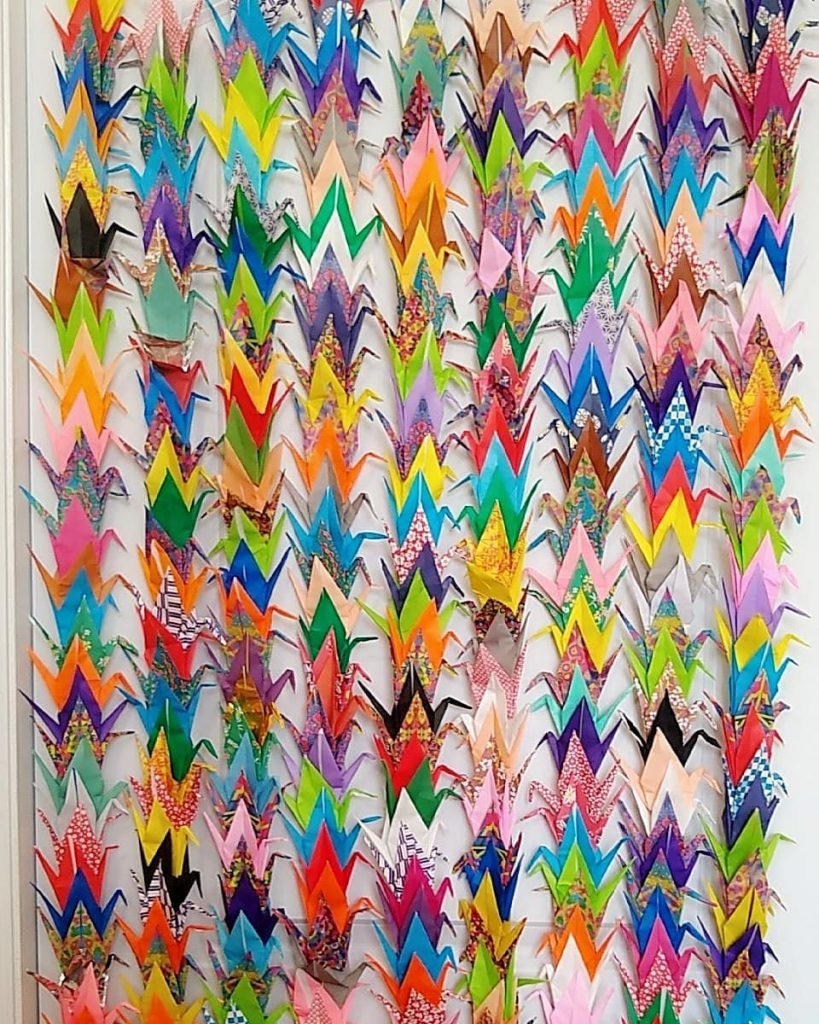 This year, 11 Zen students in our sangha dedicated themselves to sewing the rakusu, the small Buddha robe worn around the necks of lay practitioners and priests. During this time they took refuge in Buddha, dharma and sangha with every stitch sewn, in preparation for jukai – the ceremony where each would later receive the Bodhisattva precepts and vow to take up this way of life. In this image, from left to right: Tom, Ella and Anne. 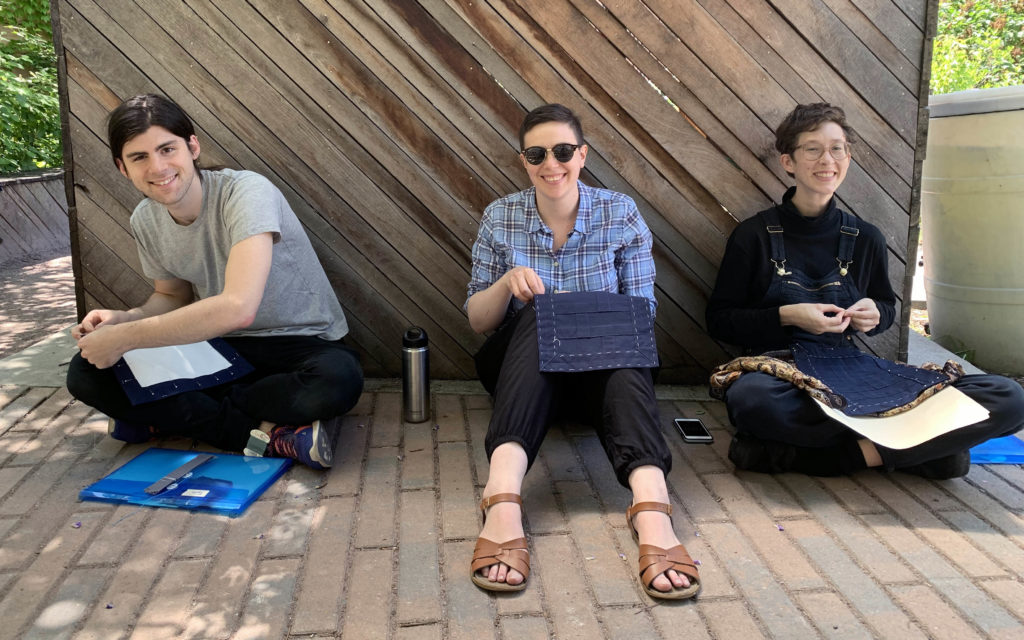 Here we see BZC sangha member Jozen Tamori Gibson with Watershed Center staff members Kasssandra Gonzalez and Vemilo at the end of the Brooklyn Zen Center summer retreat. This was the second BZC residential retreat, during which dharma teachers Kosen Greg Snyder and Laura O’Loughlin led more than 30 members of our sangha in a weeklong gathering of zazen, service, dharma talks, dokusan, and silent meals. The beautiful farmland of the Watershed Center was once again the ground for this retreat and our sangha was held with great care by their entire staff – including the most delicious vegetarian meals, with fresh produce from the neighboring farms. 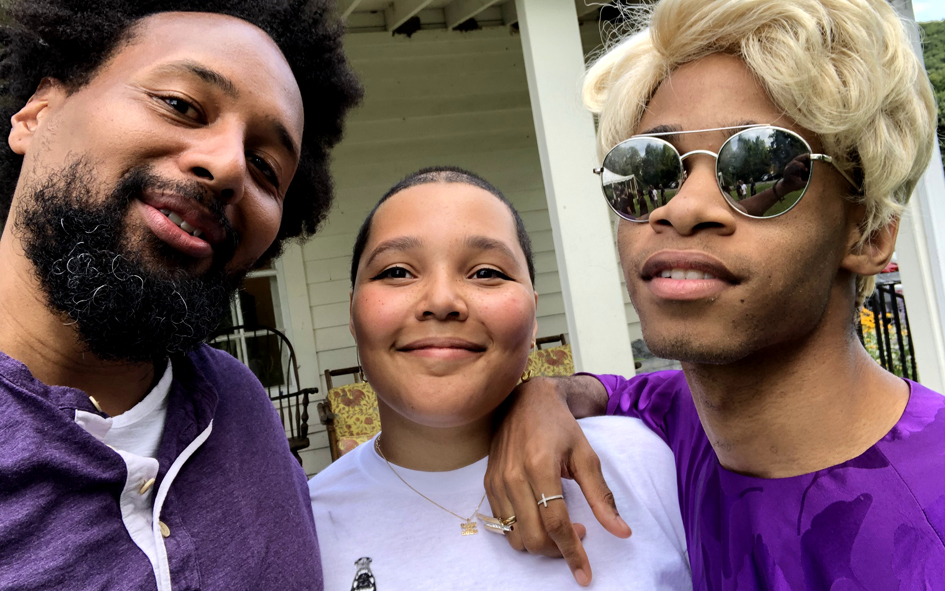 On August 11, the Brooklyn Zen Center sangha, as well as friends from near and far, came together for the opening ceremony of Sōshinji 宗心寺, Ancestral Heart Zen Monastery. Since then, monastic life has begun in the new temple, with a growing group of residents now following a monastic daily schedule. 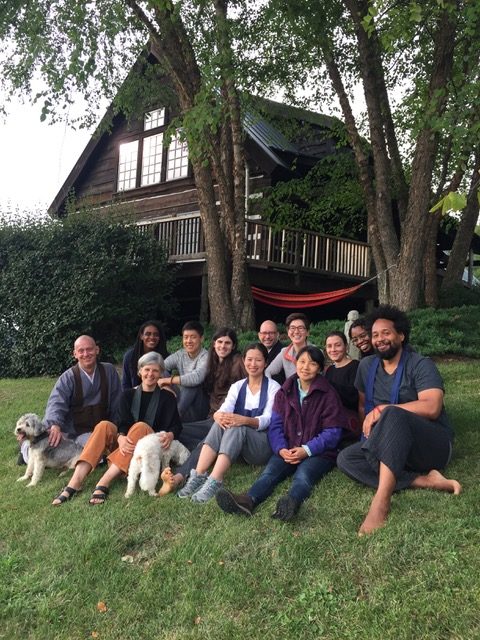 In October, at the end of a three-day sesshin, 11 members of our sangha formally received and acknowledged the 16 Bodhisattva precepts in a ceremony called jukai. During the ceremony, teachers and sangha members, as well as family and friends, gathered to support them and witness their vows to live for the benefit of all beings. The ordinands were (left to right) Ella, Anne, Ryan (first row); Alexandra, Lissa, Tom, Brenda (second row); Liz, Victory, Dexter, and Carl (third row). 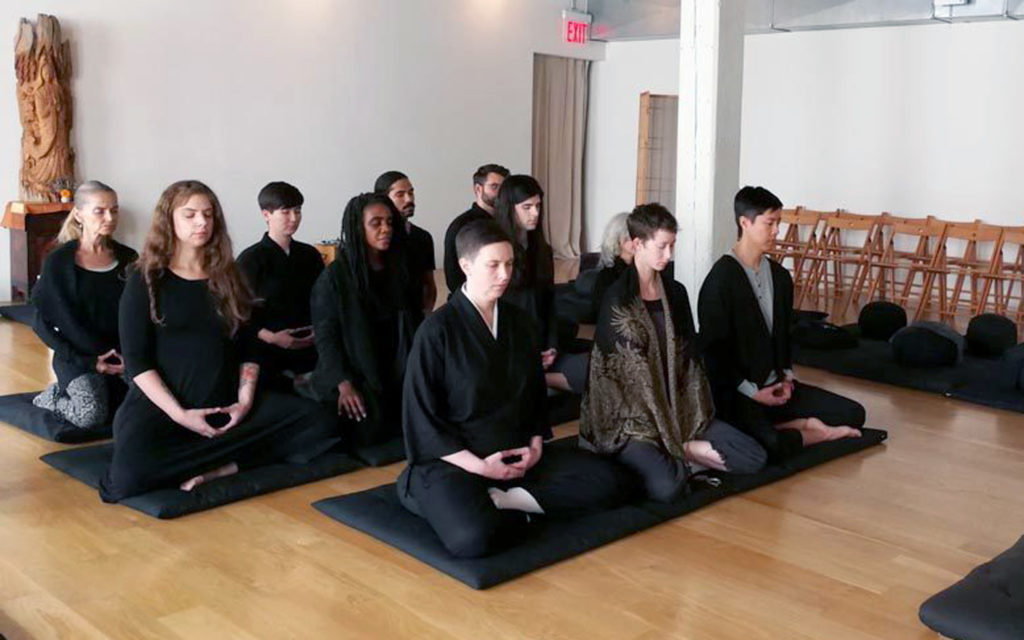 Everything is practice: Michael, Otto, and Kiku go about their chores at Ancestral Heart Zen Monastery, in a twist of the ancient Zen quote “chop wood, carry water.” 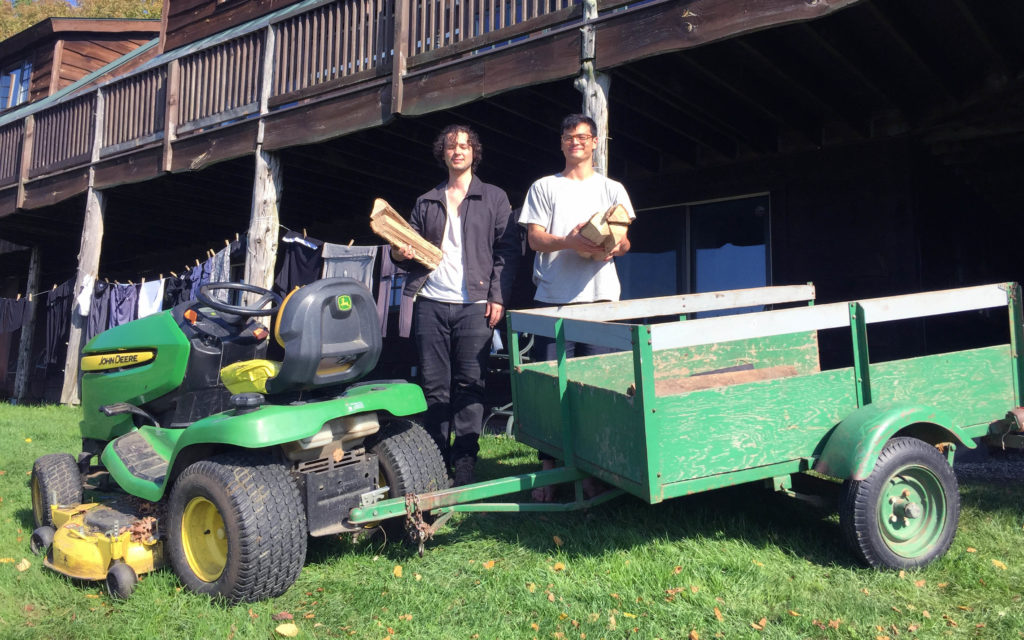 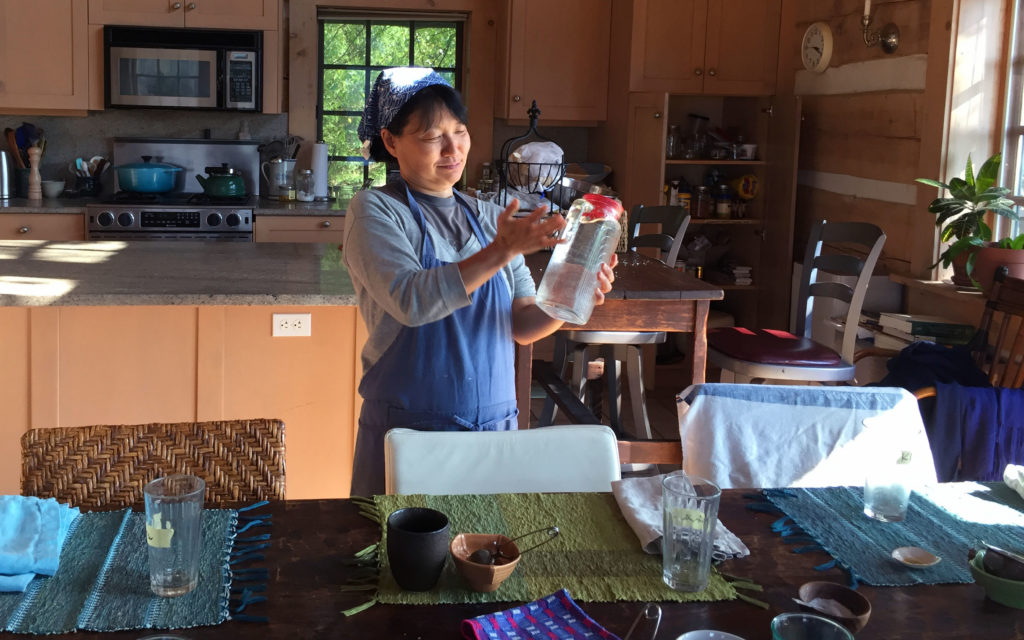 Jizo looking into the horizon

Jizo, the protector of children and travelers in Japanese culture, stands between earth and sky at Ancestral Heart Zen Monastery. 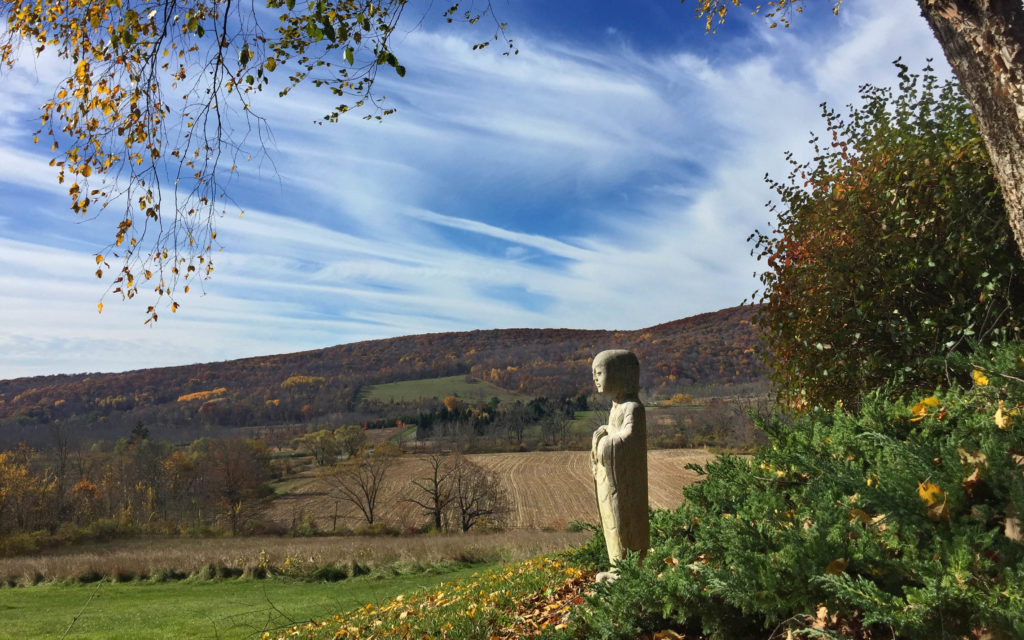 Kiku, Otto, and Victory got bundled up to roll down the slopes after the first snow. 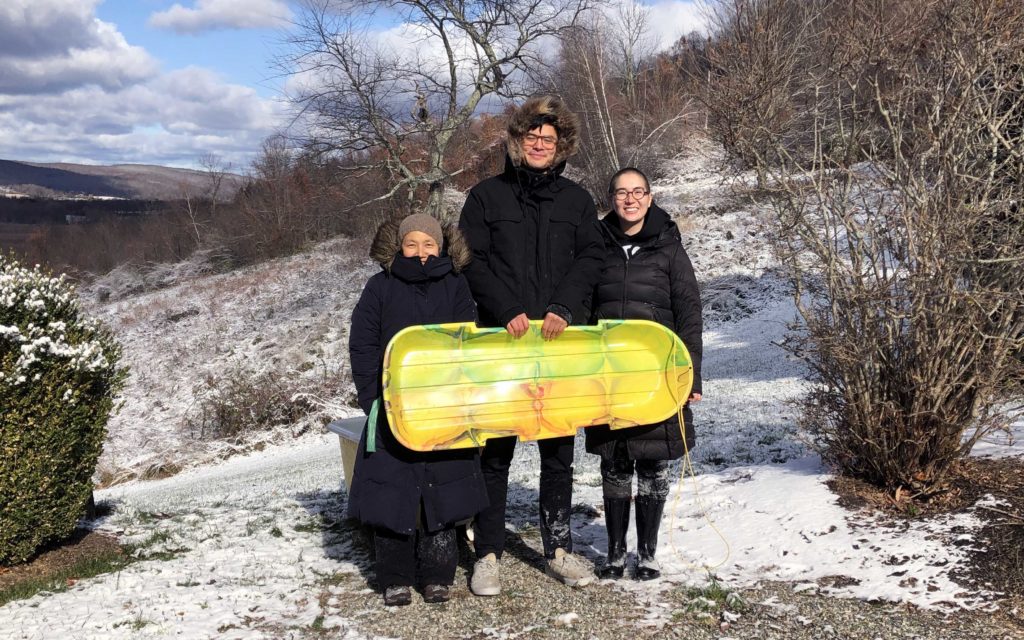 Since June last year, the ceremony of oryoki has been practiced at Brooklyn Zen Center during multiple retreats. Through oryoki trainings, setsu tip sewing sessions and much effort and care, the BZC sangha is now strongly engaged in this ceremonial form of serving and eating meals in the zendo, practiced in Zen temples since the T’ang dynasty in China. 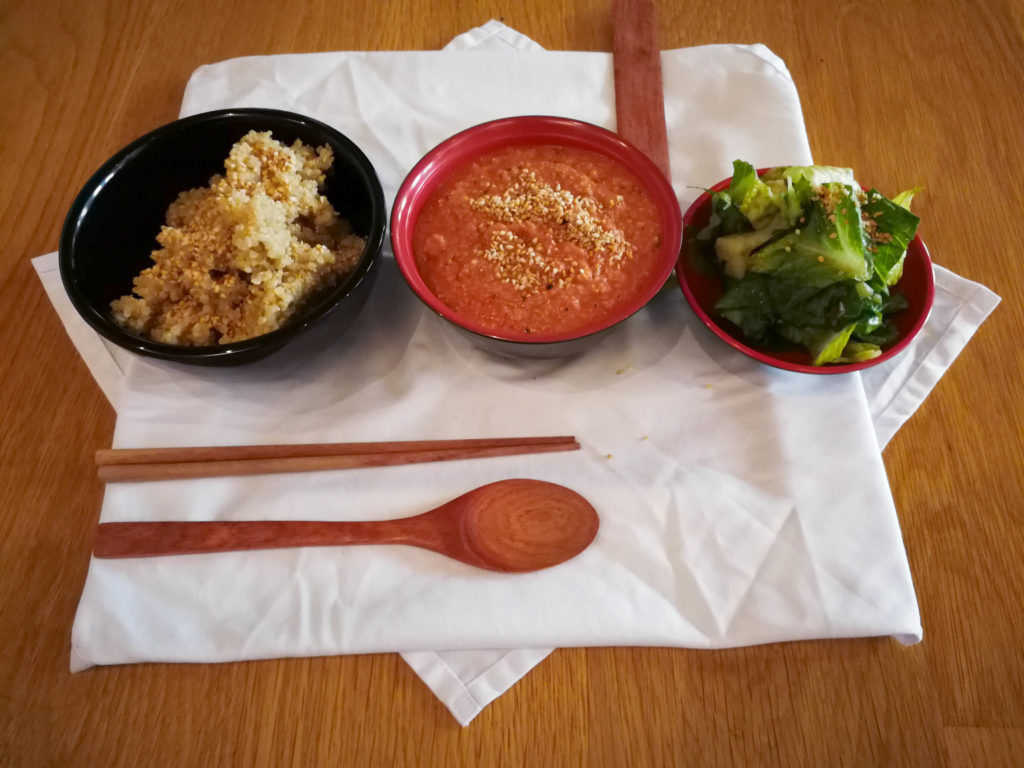 The shuso (head student) for the BZC 2019 fall practice period was Ian Case (at the center, with BZC dharma teachers Laura O’Loughlin and Kosen Greg Snyder). The shuso ceremony, which took place at the end of Rohatsu, is a traditional rite of passage in Zen. 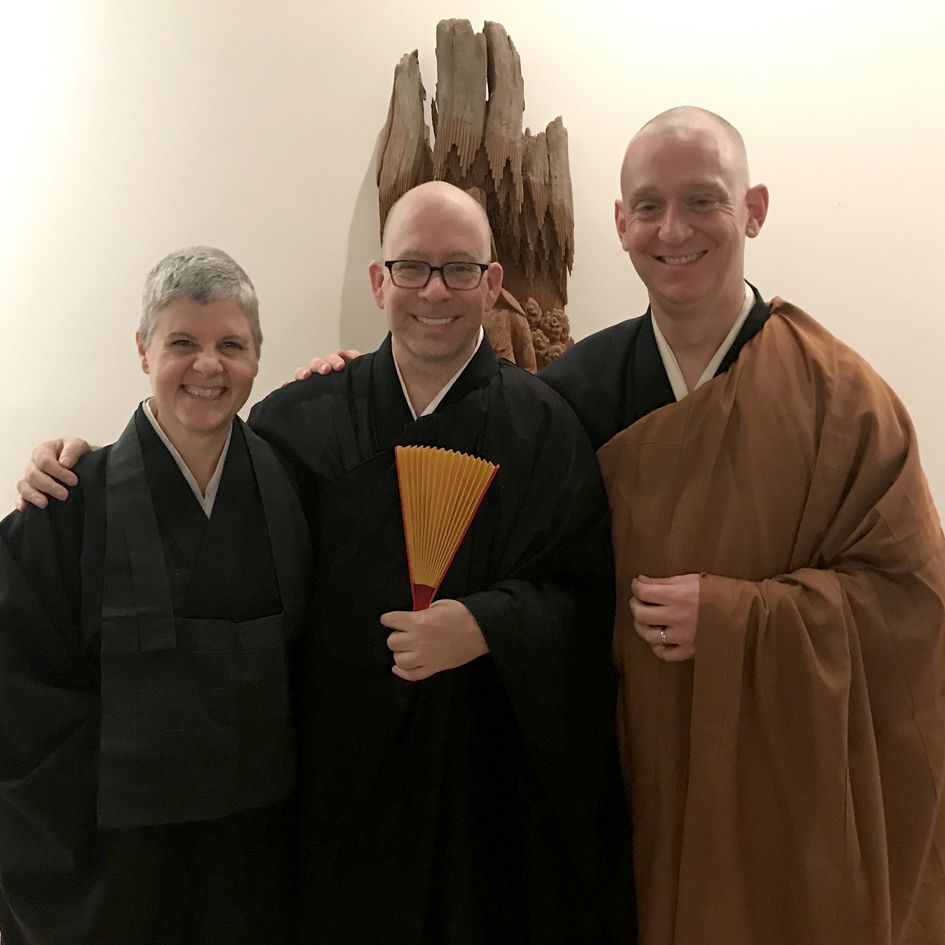 Flowers at the feet of Kwan Yan

Nothing is left unattended: the flowers at the feet of the wood statue of Kwan Yan in our zendo are a sweet reminder of the attention involved in the caring of our practice space. 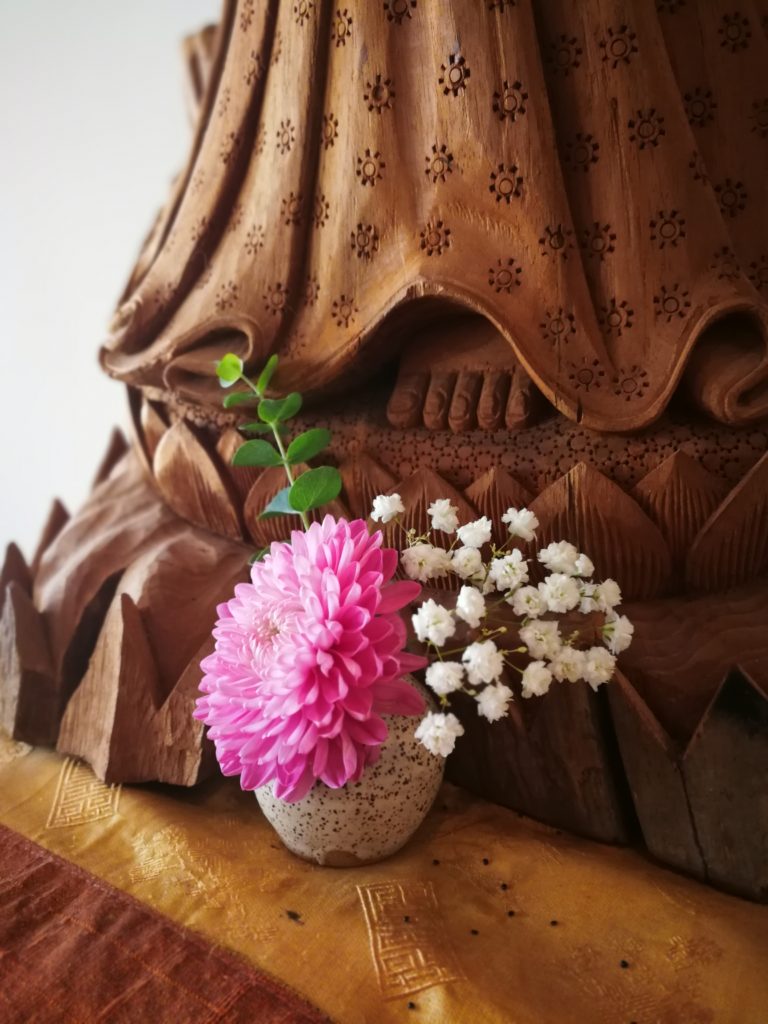 BZC is currently raising much-needed funds in our 2019 End of Year Campaign. All contributions will support the continuation of our practice in the year ahead. Thank you for your generosity!