Join us for a special BZC POC sangha gathering with Chimyo Simone Atkinson. 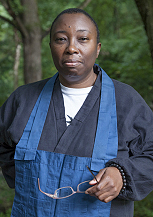 Chimyo Simone Atkinson was ordained a priest in the Soto Zen Buddhist tradition in 2007 and received Dharma Transmission in 2015. She received her monastic training at Great Tree Zen Women’s Temple in North Carolina and completed Sotoshu International training periods (Ango) in Japan in 2010 and 2011. She also completed training periods at the Aichi Senmon Nisodo in Nagoya in 2012 and Ryumonji Monastery in Iowa in 2014.

Chimyo currently serves as Assistant Abbess and Head of Practice at Great Tree Zen Women’s Temple and volunteers with the sangha at Avery-Mitchell Correctional Institute. She has served on the board of the Soto Zen Buddhist Association since 2017 and helped to draft that organization’s standards for formal monastic practice. She is a member of the Association of Soto Zen Buddhists Jukai-e committee and an SZBA liaison to that organization’s Roadmap Committee.