Approaching the end of a very challenging and unusual year, we look back at the life of the BZC sangha during 2022. Together we have established a new practice space in Brooklyn, strengthened our organizational and practice structure, participated in national meetings across the country and gathered to celebrate the priest ordination of Kaishin Victory Matsui—among much more. This selection of images is a reminder of our precious life together during the past year.

A Temple in Brooklyn

After the closing in 2020 of our temple on Carrol Street in Brooklyn, the establishment of a new physical practice space in the city was a very important moment for the BZC community. In March this year, at the end of the three-day sesshin, the sangha came together for the reopening ceremony of Boundless Mind Temple, in which we celebrated our new practice space at Christ Church!

Spring in the Horizon

Dharma teachers and residents at Ancestral Heart Zen Temple take a moment to pose after a (very windy) garden opening ceremony in March. 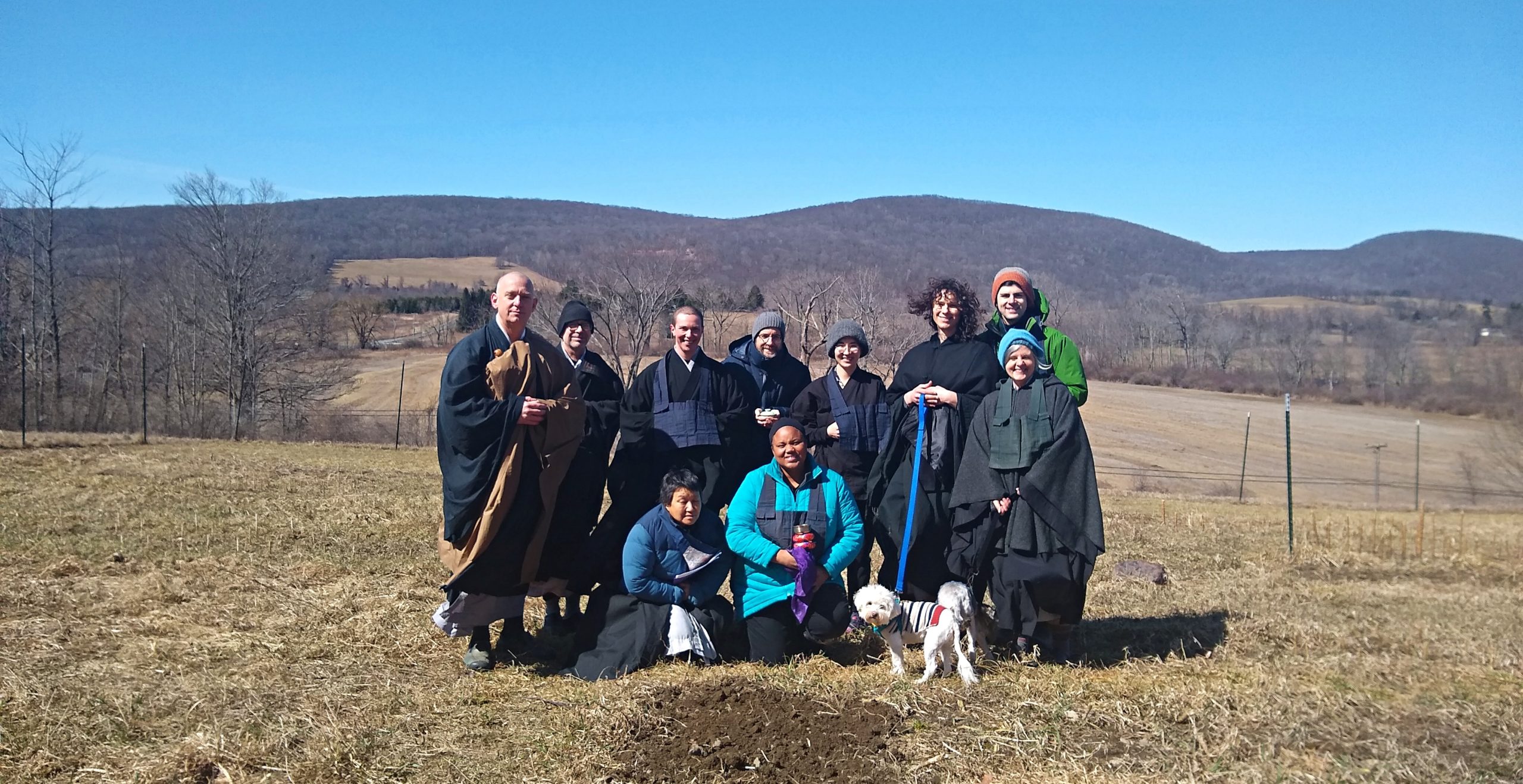 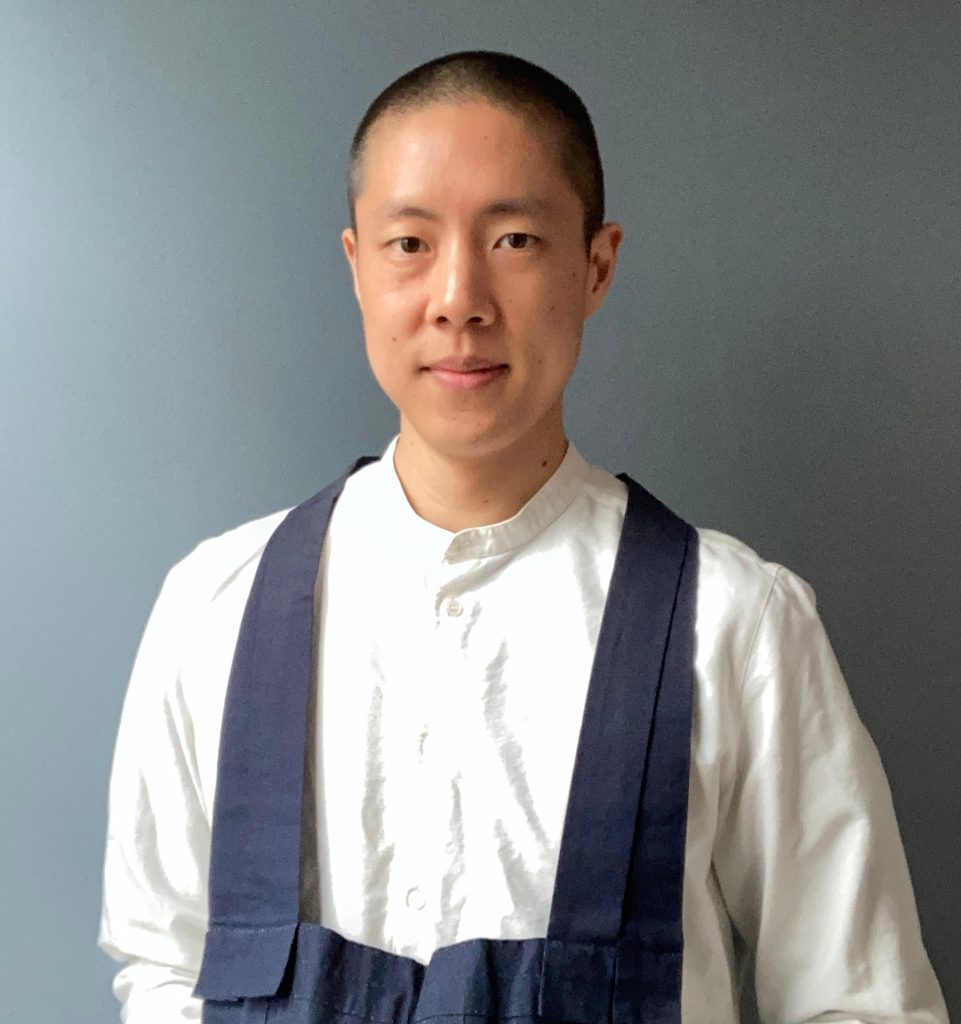 In early April, Ryan Lee Wong stepped into the new full-time position of Administrative Director! A new role at BZC, the AD not only manages day-to-day operations but also supports logistics, strategy, and administration at BZC. Since then, Ryan—a long time member of our sangha who has been serving the community in multiple roles over the years—has been instrumental in helping to implement BZC‘s mission and strategic plan.

This year, BZC has designated its first two Sangha Harmony Allies: Renhō Gerardo Dexter Ciprian and Inzan Monica Rose Smith. The Sangha Harmony Allies (SHAs) are a new role recommended by the Ethics Working Group as part of the formal Ethics Process. The SHAs are tasked with meeting and holding ethical concerns in the sangha, and strive for impartiality, fairness, and true communication. Inzan and Renhō brought a depth of practice, commitment to our sangha, and compassionate hearts to this work. Their dedication and commitment has helped sustain the sangha during this year. 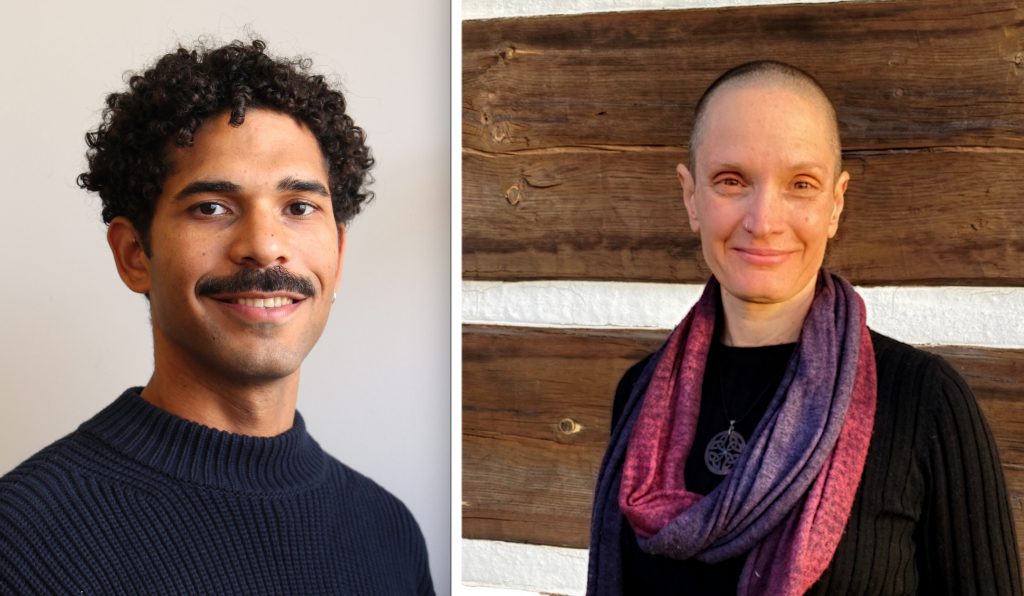 Forty zen leaders, students, and teachers from across the US and Canada gathered in Austin for the Branching Streams Conference, which brought together temples in the Suzuki Roshi lineage. Ian and Ryan represented BZC, and participated in workshops on healing circles, climate change, and poetry, and in between gathered to discuss everything from our CRM systems to Undoing Whiteness work to staffing our temples.

Sarah Dōjin Emerson and Korin Charlie Pokorny moved to Brooklyn this summer and are now supporting the BZC sangha and organizational life at Boundless Mind Temple. As ordained priests and dharma-transmitted teachers, they have both brought their many years of training to the benefit of our community throughout the fall Practice Period. From dharma talks, to practice discussion, retreats, sewing instruction, and Zen training, they have become a cherished and precious support to our sangha. Thank you, Sarah and Charlie! 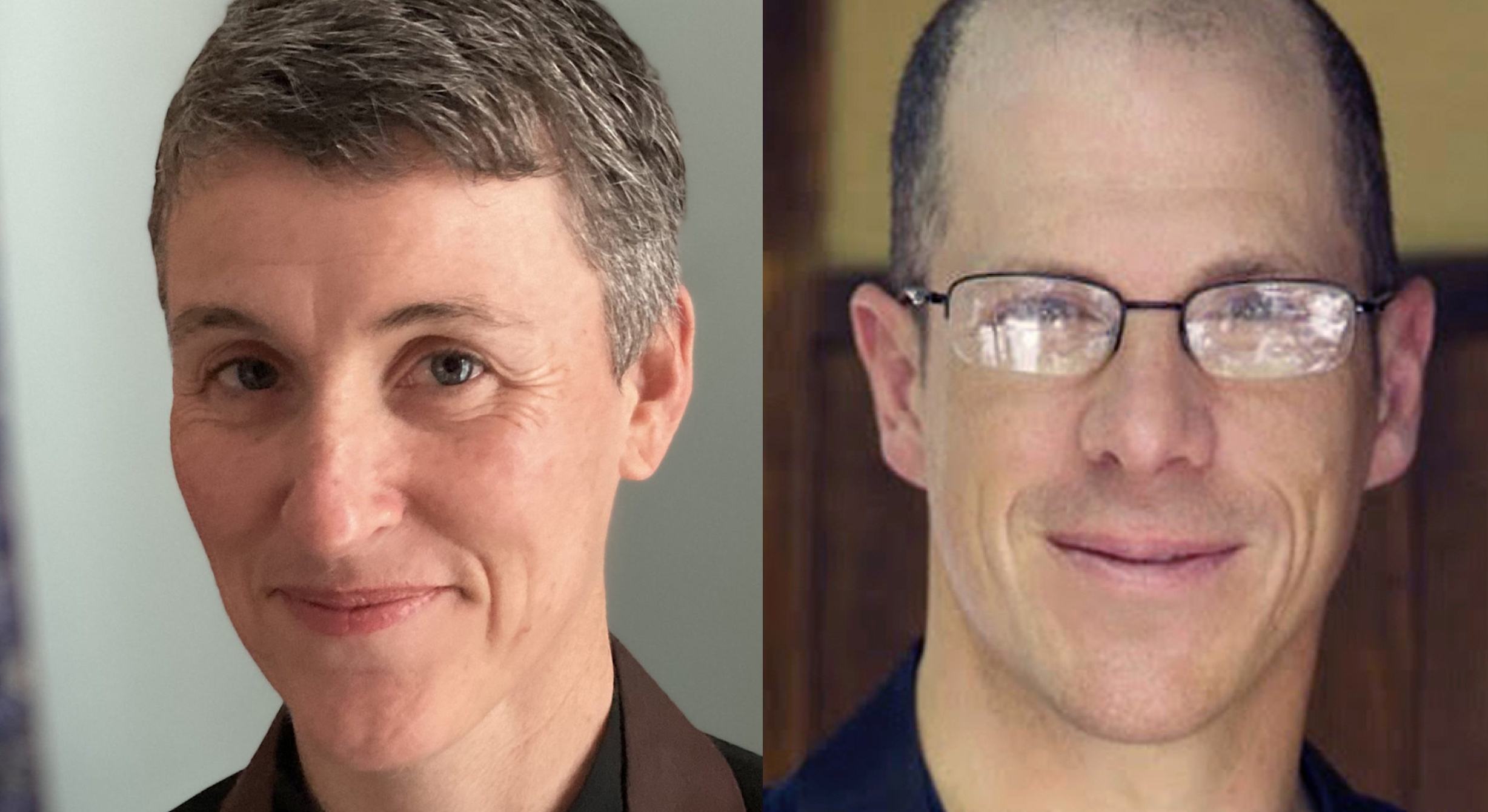 BZC Board Chair Weishin Huang attended the four-day Future of American Buddhism Conference in Garrison, NY. Weishin shared some highlights from the conference, giving us a taste of the conversations that took place there about the state of our mahasangha:

American Buddhism is messy, complicated, and, at times, painful and fraught. Yet, if those present at this two-hundred-plus-person gathering, onsite and online, were reflections of the Buddhdharma in this also-messy nation-state, then I have full faith that the three jewels—already carefully cared for on Turtle Island for two centuries—shall continue to glisten, like Indra’s net, amongst the multitude of intersectional inter-beings, for many more moons. 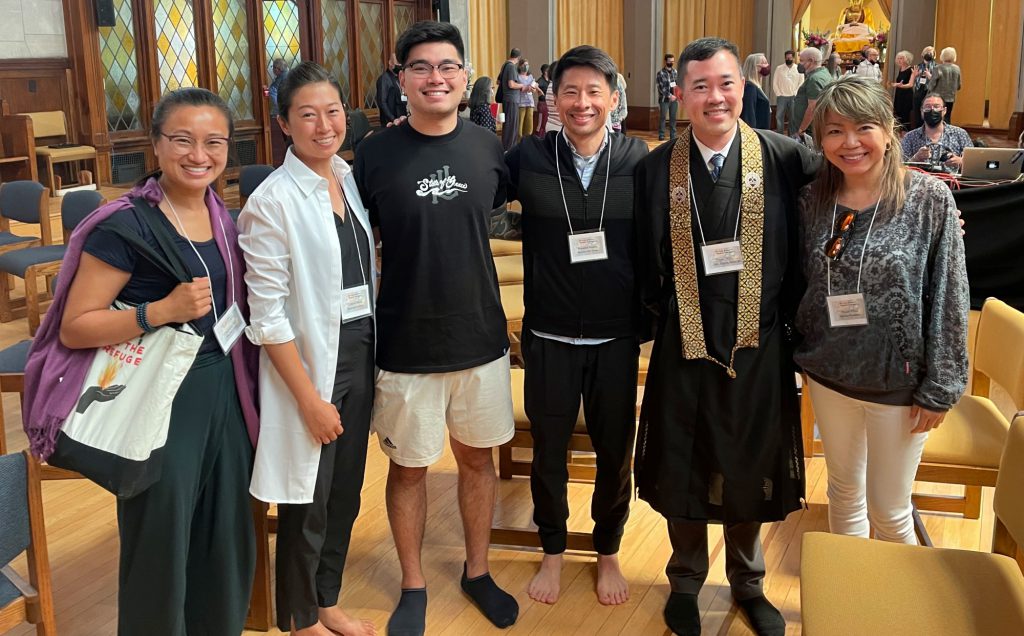 The BZC annual summer retreat was filled to capacity—again! Kosen Gregory Snyder, Shingetsu Laura O’Loughlin, and Kidō Ian Case co-lead the BZC Residential Summer Retreat this August at the Watershed Retreat Center, next to Ancestral Heart Zen Monastery, in upstate New York. During this week-long Soto Zen retreat, participants followed a semi-monastic schedule, which included zazen, service, study, dharma talks, discussions, meeting with teachers, and silent meals, along with time for swimming and walks in the woods. The retreat marked the Teacher Entrustment of Kidō Ian Case, a major step for Ian and the BZC sangha. 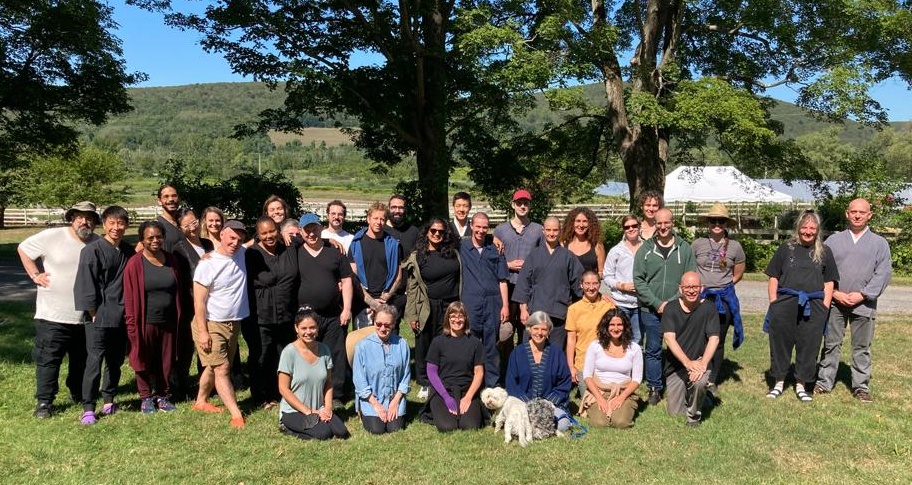 In October this year, the BZC sangha came together to celebrate the Zen priest ordination of Kaishin Victory Matsui by dharma teacher Kosen Gregory Snyder. Surrounded by BZC’s teachers, senior practitioners, sangha members, as well as family and friends, Kaishin took a vow of dedication to practice and community. The first such ceremony to take place at Boundless Mind Temple in Brooklyn, the gathering was a very special occasion for our community! 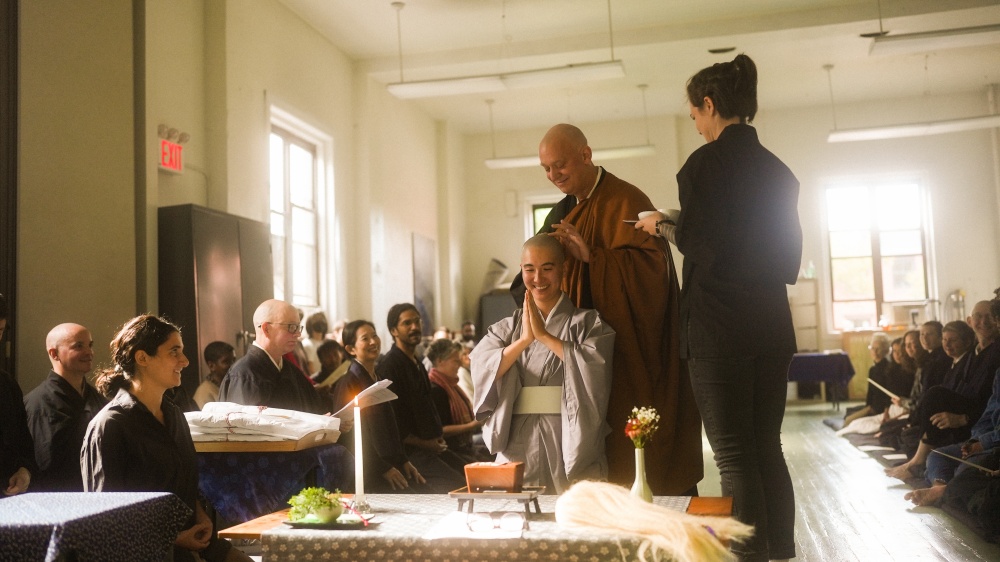 A group of nineteen Jukai ordinands has begun sewing rakusus and delivering Way-Seeking Mind talks. This is the largest group of ordinands in-training at BZC, a sign of the strength of the dharma in our community. They will be receiving precepts in June 2023. 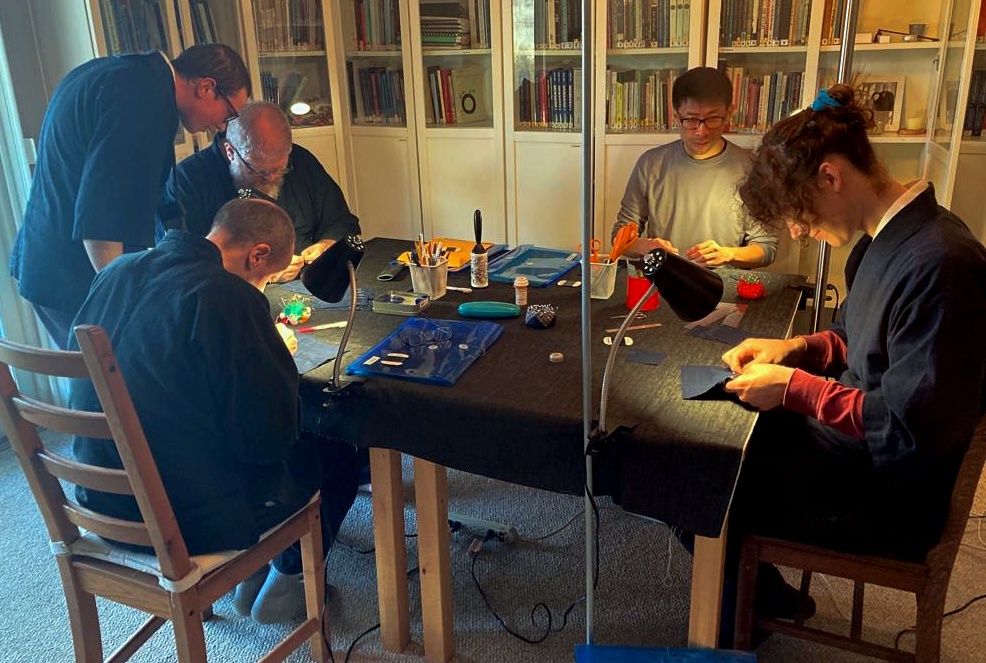 In November, six members of BZC attended a Jukai-e marking the 100th Anniversary of Soto Zen in America hosted by Zenshuji in Los Angeles. There were 100 kaitei (ordinands) from around North America, as well as 100 priests from North America and Japan to organize and hold the ceremonies, including a tenzo ryo from Eiheiji. Each day was packed with services, many of them rarely done in North America, as well as talks from elders in our lineage like Shohaku Okumura, Tenshin Reb Anderson, and Konjin Gaelyn Godwin. Gengo Akiba Roshi presided and offered the precepts to the kaitei. It was also an historic mix of Sotoshu representatives, historically Japanese American sanghas, and zen centers like BZC, forging stronger bonds between these different expressions of sangha. 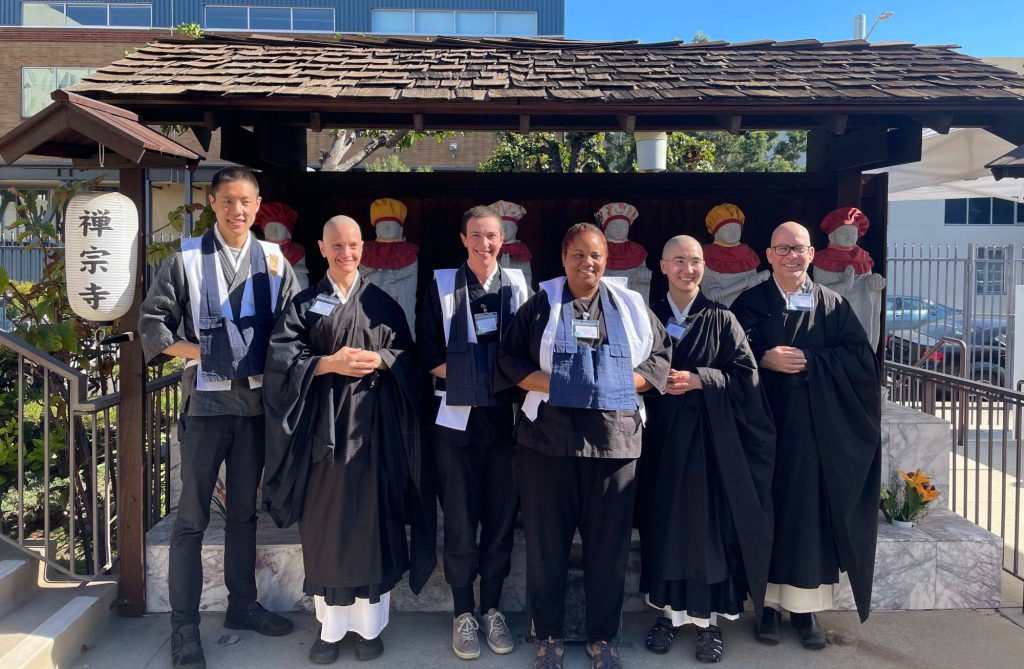 Not the most quiet of creatures, but here is Milo, one of BZC‘s dogs, in a moment of calm in the zendo, enjoying the warmth of the sunlight. 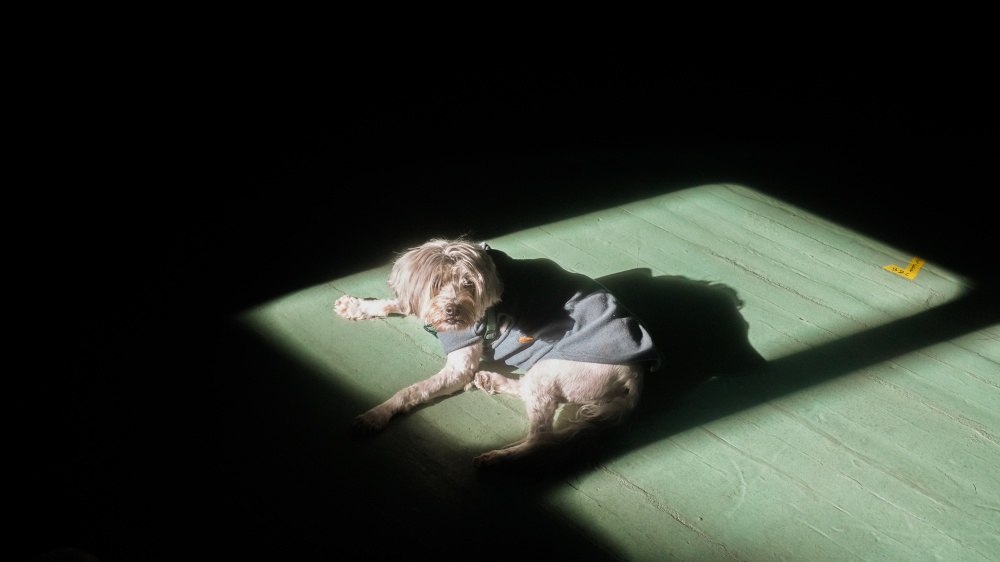